Making a POD with Lightning Source: Holy crap…I got me a book!

The process of creating a POD version of Freedom Club continues to progress well.  After uploading my content PDFs for both the book’s interior and cover, I finally received my proof copy by UPS.

And the final result? You can see here: 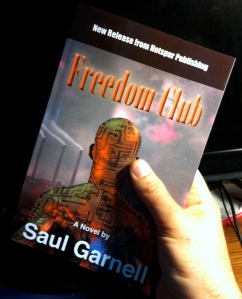 It’s a perfect bound 5×8 trade paperback, perfectly square with soft cream paper. Just over 400 pages, it feels like a quality product. Lightning Source has done an outstanding job, and it sure does feel like I made the right choice using them for POD distribution.

I must say, seeing the book on real paper does give one a true sense of accomplishment. Now all I have to do is market the book, and get everyone to read the darn thing. That…will probably end of being a life long endeavor.

I am of course indebted to everyone at Hotspur Publishing who helped bring this to fruition. I’m certain my first book would have been a disaster if I’d gone it alone.

Stay tuned for more on my humble attempts at marketing.

The process of creating a POD version of Freedom Club has progressed very well.  After having my designer create PDFs for both the book’s interior and cover, it was fairly painless to upload the files, and request a proof copy. Cost of the Proof? $30

One thing I’d like to highlight is the Lightning Source customer website. It shows all the titles that have been submitted, and contains an instant link to on-line chat with their customer support team. Below is a screen capture of my chat with them. They were nice about confirming the status of my new submission and the next steps of the process. I must say, it was wonderful having their on-line chat– right there on the spot. All my questions were answered, taking a lot of worry out of the process.

Another point worth mentioning is the fact that Lightning Source  is having a campaign, allowing me to set up new titles for free. Normally, it costs $75 to set up each book, but this fee is dropped if I order 50 copies. Since I needed promotional copies anyway, this was great timing!

So far, so good. I’ll keep writing as this process continues.

Shaun Farrell, who runs the Adventures in SciFi Publishing podcast, interviewed my editor David Bischoff last week.  The whole thing went very well, and David did an excellent job talking about his long career both as a writer and editor of SF, and his recent foray into indie publishing. As you may know, David started Hotspur Publishing, an independent company to publish his backlog that has accumulated over the years, along with new titles like Freedom Club, written by me.

I’m especially pleased that my book was mentioned as well during the podcast. It was really nice of Shaun to help promote the book, and I would urge everyone to listen to episode 154 of Adventures in SciFi Publishing and even comment on the the podcast web page if you can.

Well, my first Kindle novel Freedom Club has finally been launched as of early October. Many thanks to the entire staff of Hotspur Publishing. Everyone worked very hard to get this first release ready.

Also, notice the final cover design. Isn’t it great? I am thankful to everyone who voted on the two versions that were posted last month. Clearly, the one named simply, transistor man, was a clear favorite by a margin of 3 to 1.

In any event, I’m looking forward to feedback from all my readers. All comments are welcome. Well…at least the nice ones 🙂

Freedom Club – To Be Published by Hotspur

My first novel, Freedom Club, is coming closer to public release, so I suppose its time to inform everyone about its progress. I began writing this novel in 2007, when I was still living in India. However, in the summer of 2009, I began working with David Bischoff, a published author and accomplished editor, who coached me for about two years as we brought the book to fruition. A few months ago, Dave gave the manuscript his final okay , and now it’s in the hands of Chris Lampton for a final round of proofing. Chris is also an writer and editor with decades of experience, and will fine tune the book prior to first publication.

However, it is the publication of the book that has taken on a new life and needs some explaining. You see, way back in 2007 I set out to write a book good enough to be publishable by the large NY publishing houses. With Dave’s help I believe we have achieved that goal.

But the world has changed drastically in the last few years.  Publishers are (IMHO) not open to first time authors. They want to bet on established writers who can provide guaranteed revenue. It’s a move that may prove true in some cases, but not all.  They (the big publishers) don’t know where things are really going. If they could I, suspect they’d stop all the upheavals . They’re simply digging in as the market reforms. Amazon, e-books, and POD have opened new channels for everyone to dive in, and with all the new players around, it’s hard to tell who has the firmest grip on things . Maybe, it’s the authors for once. Wouldn’t that be nice?

So given all the turmoil and change, I lost my appetite to publish Freedom Club  using the traditional model. That is, submit like crazy to finding an agent, who then will convince a publisher to go with a first time author like myself, then pray nothing goes wrong. Well, I believe that old process is broken. And even if it were to work, it can only take place with with high risk, while offering  me the author less returns.

So instead, I have decided to publish with Hotspur Publishing, a new publishing house created by my editor, Dave. Neither one of us planned this, but I think this period of time is special. New publishing houses like Hotspur could not exist just a few years ago. As long as the talent is there, it’s amazing to see how easy it is to bring a book into the marketplace these days. In fact, I don’t think Hotspur’s methods will be any worse than the large publishing houses. 95% of the writing and editing has been done. And everyone uses e-book and POD technology as large print runs become a thing of the past. The only real meaningful difference is that the established publishers have enormous overhead to cover. Elaborate layers of managers, accountants, marketing experts, lawyers, editors, interns, and illustrators. Am I forgetting someone? Oh yes: writers.

The problem seems to be that not enough people add value in the old model. Of course some editors are doing a good job. And yes, some mass marketing may have a positive impact on sales. It just that, well I don’t think the old gang will make Freedom Club any better or successful than Dave and Chris will. We’re a small group of talented people, putting all our efforts into one, and only one thing:

So, in the next month or so I look forward to setting Freedom Club loose. It may not be a big hit, but who cares. Failure happens all the time. Even for established authors. I just like writing science fiction, and I’ll keep doing that with Hotspur for no reason other than, it’s a lot of fun.

Isn’t that what writing should be about?