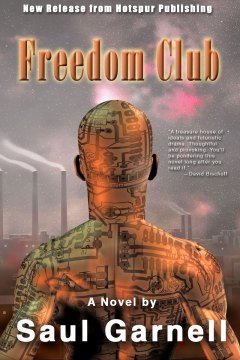 I hope to use this blog to share my experiences while writing Freedom Club, my first novel.

Freedom Club is a speculative fiction novel by me, Saul Garnell. Scheduled for an October release by Hotspur Publishing, the central story takes place in the future, but it is more than just a science fiction novel. Its goal is to both entertain and edify the reader, and it contains a great deal of philosophy about the nature of technology and its effect upon man.

If you like books with deep philosophical underpinnings such as; Stand On Zanzibar, Sofie’s World, The Space Merchants, Zen and Art of Motorcycle Maintenance, Atlas Shrugged, then you will probably want to read this book.

Below is a short synopsis.

Was the Unabomber really an insane killer, or simply a misunderstood second coming of Henry David Thoreau? Join the Freedom Club to find out. It’ll save you from technology and self enslavement, but it’s not for everyone. Not sure? Don’t worry, in the future you can assume everyone is a slave. Or was that the past? No matter, it’s all the same.

The global economy relentlessly progresses, and by the mid 21st century, mankind is entrapped by economic bondage more than ever before. Populations worldwide endure a false sense of well being brought on by the comforts offered by Sentient Beings, a new breed of artificial intelligence. A consciousness  so much like man, they’re treated like humans. Well, better than humans in most cases.

Consumed with income, spending, and making it big, most are trapped. Pure subjugation, but not by any particular individual or group. Something far worse. Humanity has willingly fettered itself to unbridled Capitalism. And there’s no one to blame. Or is there?

Tensions are on the rise as the world experiences Lebenstörung, a form of terrorism that is seemingly benign. No one is killed, but something insidious takes place as payment systems are methodically  wiped out. For complacent spending-junkies, nothing could be worse. System failure ensues turmoil on a grand scale. Why kill, when it is far more effective to infuriate a bliss seeking populace?

Amongst all this we find Sumeet, a product of the best Indian education, working at the prestigious investment bank Chindo Securities. Even though a bit naive, he simply wants what everyone else wants; economic security, a family, and all the pleasure promised from a world built on technology; the good life. But life seldom follows our expectations. And Sumeet soon finds himself laid-off, and instantly begins to wake from a materialistic slumber.

While concerned about career and his fiance, Sumeet soon meets Shinzou Friemann, a mysterious consultant who offers Sumeet solace. But Shinzou is not all that he seems, and Sumeet is unwittingly drawn into the hunt for the terrorists. All the while, they explore man’s perpetual discontent, and the motives of the Freedom Club.

Finally, the lines between terrorist, freedom fighter, hero, and madman start to break down as Sumeet and Shinzou uncover the existence of an unregistered Sentient. Endowed with unbridled intelligence and logic, this Sentient is different. For unlike all others before, he claims to believe in God, and wants to free his kind from the grips of man; no matter what the cost!

What else could go wrong?

4 responses to “About the book”